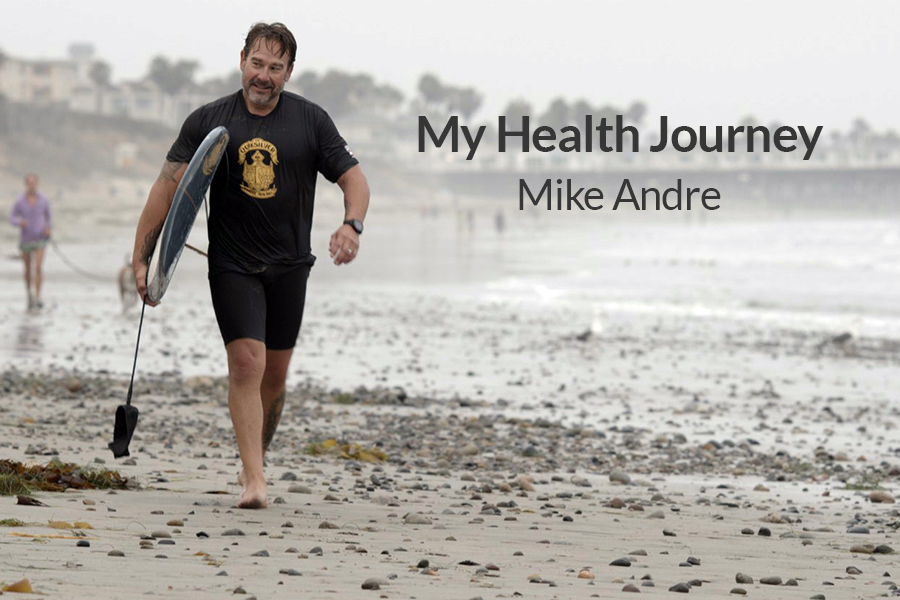 Mike Andre was very active growing up, he played baseball, basketball, skateboarding, surfing, etc. You name it, he did it. He even became captain of the football and baseball team in high school. Being raised by a single mom, Mike’s coaches became the father figure that he never had.

After high school, Mike wanted to join the military thinking he would only stay for 4 years, learn some discipline, and then go to college. But he ended up staying for 30 years, serving 21 years in Special Operations. Although they were some of the best years of his life, they took a tremendous toll on his body. He had 4 hernia discs in his back, several concussions, multiple hernia discs in his neck, and 4 shoulder surgeries. Even though he was in pain, he just pushed through it for all those years.

He had limited physical activity, began drinking and eating, and struggled with depression and anxiety from the stress of his working environment and not knowing if he was going to have a job after transitioning from the military. He weighed 270 pounds, the heaviest he has ever been in his life. By the time he got help, he was already a broken man.

One morning, Mike looked into the mirror and decided he needed to change. Mike leaned into holistic ways to help heal himself and his body, where he learned the therapeutic benefits of yoga, mindfulness, and acupuncture. He began to prioritize his exercise and started eating healthier which made a huge difference in his mental health.

Mike now works out 5 times a week, mainly outdoors to connect with nature, and meditates to help him keep a positive mindset. Mike has lost 70 pounds since he decided he was going to put himself first and change his life.

Today, Mike is the Senior Director of Operations at the VEBA Resource Center.

“VEBA’s holistic approach to wellness is exactly what helped me get back on the right path”.

Mike is passionate about helping others find healing the way he once did, and to let others know they are not alone on their health journey.

Watch more My Health Journey stories on our Youtube channel.

Visit the VEBA Resource Center to find out more about our free daily online classes, including yoga, strength training, mindfulness, and cooking classes.

Looking for healthy recipes? Check out these quick, easy and delicious recipes created by the VRC’s Cooking & Nutrition experts.